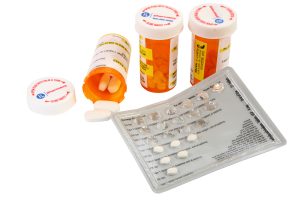 Rick Bower keeps the  he’s given up on in a shoebox beside his bed. The last time he looked, it contained 37 bottles.

His current lineup of pills he takes daily, to help control his type 2 diabetes and other health problems such as insomnia, are kept in a separate container. When he loses faith in a drug, either because it doesn’t seem to be helping or causes unwelcome side effects, then that bottle goes in his discard box.

Pills targeting problems that appear to have gone away, at least for the time being, such as the Verapamil he used to take for high blood pressure, go in the same box.

Every so often he purges expired medications, which he takes to a drug disposal drop-off site near his home. But he doesn’t throw his old drugs away, because occasionally he will have a flareup of some condition he thinks he has medication for, and he will search the box for something that might help.

The trouble is, unless he has written on the bottle what the drug is for, such as one marked “chest pain” in black marker, then he may not find what he’s looking for.

Bower knows his doctors would disapprove of his methods.

In the morning scramble to get to work, he prioritizes those he relies on most. Pills farther down the list eventually wind up in the shoebox.

The 67-year-old Markle, Ind., man is hardly the only one who doesn’t stick with the medications his physicians prescribe. According to data from PrescribeWellness, a software company serving community pharmacists, 12 million prescriptions for chronic medical conditions were written, filled and then abandoned in the month of January alone. Of those, 3.2 million were one-time prescriptions for new medications.

“We know from analyzing our data that every month in the United States there are approximately 200 million pills that are picked up at pharmacies and never consumed,” says Sean Power, vice chairman of PrescribeWellness. “These extra pills are either stockpiled in cabinets or flushed down the toilet. We also know that non-adherence to medications for chronic medical conditions is a $300 billion cost to the healthcare system each year.”

And that doesn’t even count those patients who never bother to pick up their prescriptions in the first place, a figure that some studies cite at up to 30 percent, depending on the medications involved.

When it comes to type 2 diabetes, faithfully taking prescribed medications has been shown to reduce hospitalizations and emergency room visits by 13 percent, according to a study published in 2012 in the journal Health Affairs.

So why don’t people take their medications as prescribed?

A lot of the things that get in their way “are completely understandable,” says Dr. Bill Polonsky, a clinical psychologist and certified diabetes educator who founded the Behavioral Diabetes Institute in San Diego. A drug regimen can be an inconvenient addition to a busy schedule filled with other priorities that might seem more pressing, especially in light of the long-term nature of the disease. Because there is no immediate, tangible benefit to taking the drug, it may be hard to balance the importance of doing so against any perceived skepticism or fears they may have.

“A bigger, more insidious problem is that people tend to measure how healthy they are in terms of how much medication they take,” he said. Viewed that way, their goal is always to reduce the number of meds. “But it’s not the amount of medicine you’re taking that’s the problem; it’s how high the blood sugar is.”

According to Polonsky, a major indicator for how diligently people take their medication is how much they trust their doctor. At the institute, he advises doctors to treat patients respectfully to earn their trust.

“Can we take our hands off the doorknob and sit for a couple of minutes and listen to their concerns?” he asked. “The other thing is, if you’re concerned about whether a patient is taking their meds, take out a piece of paper and lay out the pros and cons for them. It may take a few minutes, but it’s worth it.”

As for patients, Polonsky says the most important thing they can do is to find a doctor they can be honest with, so they can find real solutions to their problems rather than simply telling the doctor what they think he or she wants to hear.

Bower, the type 2 diabetes patient from Indiana, says he sometimes gets frustrated trying to coordinate the instructions and prescriptions from four or five different specialists. At one point, he wound up with duplicate prescriptions when metformin was prescribed by two different doctors to help control his blood sugar.

“What I really need is a doctor who organizes the other doctors,” he says.

Still, he thinks all of his doctors really do try their best to get a handle on his evolving list of conditions and the medications he takes for them. He tries to help by taking a cell phone photo of the pill bottles in his current daily lineup before each appointment.

“I haven’t found anything that works for neuropathy,” he says. But after trying different drugs, he continues to take the Gabapentin he was most recently prescribed because he hopes that may at least prevent it from getting worse.

He also makes a point of talking candidly with his doctors about when he’s stopped taking a drug, and why.

Metformin, for instance, gave him diarrhea, so he couldn’t bring himself to take it every day. His diabetes doctor has since recommended Tradjenta. Bower won’t know for sure if it’s doing its job until his next A1C test, but at least it doesn’t appear to be causing any problems.

He hopes this drug stays in his daily lineup, instead of going into his discard box.