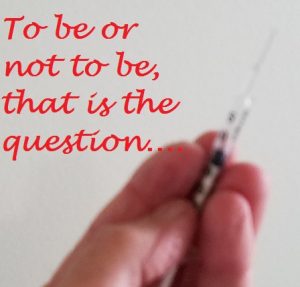 As is well-known, my last life was all about the theatre, television, and acting.  There’s a saying in the theatre world that goes like this; there is no such thing as small parts…..just small actors.”  I once directed a group of incredibly talented actresses in a production of Twelve Angry Women (which is the female version of the show made famous as Twelve Angry Men).  The show is an intense deliberating room of a high-profile crime where the life of the accused rests in the hands of 12 jurors.  I was fortunate enough to work with 12 hugely talented young women who were fabulous in each role.

I decided to try to make this as real a production as possible and did it ‘in the round’, where the ‘stage’ was in the middle of the audience and the audience could barely breathe as they were so close to the action.  In the production, there was the role of the 12 jurors but there was also a ‘thirteenth’ actor who was the guard who would come and go as needed.  The young actress’ name was Janet and I asked her if she was up to a little challenge?  She agreed.

In the script, the guard comes and goes answering questions, bringing items as needed, and escorting the jurors in and out of the room.  In most productions, the guard exits off stage until needed next.  It was my belief if we were to make this as real as possible, the guard would be posted outside the door.  There would be much down time between times ‘the guard’ would come in and out and Janet had to make the role both real and not distracting from the action ‘on stage’ at the same time.

I could not have picked a better actress.

Janet bought everything from crossword puzzles to magazines, to a bag lunch; she would eat, get up and listen at the door when voices were loud, and she was about as real as a courtroom guard one would ever see.  Any time an audience member glanced toward the guard she was busy…..being a guard. The role was as thankless a role ever written for an actor but Janet got every bit of mileage out of it possible and the audience noticed every night.  There was not one iota of wasted energy in Janet’s performance, who did much with little.

People have contacted me and said over the years in response to my ‘just don’t do nothing’ phrase, “I have no time, no money and no availability to do anything to help others with what I’m going through in my diabetes world”.  My answer has always been the same; if we do not do for ourselves………………….who will?

Just like Janet in her small role, you will get out of it what you put into it.  It does not have to be big at all and what you choose to do is entirely your choice.  But remember this, If you do nothing, nothing is how much you will help.  If something ‘small’ is all you have in time, money, or energy to pursue—-small is more than nothing.  And that small part you play may be huge to the person you help.  Think about it.
I am a DiabetesDad.

Diabetes Health in the News: Weight-Loss Efforts Not Affected by Obesity Gene