While daily meal planning can be tricky when someone in the family is living with diabetes, the holidays can be especially challenging.

The landmines that are cookies, cakes, and other sweet treats are seemingly everywhere, waiting to implode a healthy meal plan. By some estimates, a traditional holiday meal can pack as many as 5,000 calories.

But even as David Zinczenko of “Eat This, Not That” fame was getting berated for his healthier holiday selections on NBC’s “Today” show during the days before Thanksgiving, I was planning how to weave some of his smart ideas into our holiday season. (Choose white meat over dark, and skip the sugar-saturated cranberry sauce.)

I already had some tricks up my sleeve, but any new advice really helps, since my husband works hard to keep his type 2 diabetes in check, and I need to do my part to keep him feeling healthy but not deprived.

Initially I had a hard time giving up my favorites. But for the past few years, I’ve gotten pretty good at making light, diabetes-friendly food taste decadent, and there’s no reason not to bring those same tricks to the holiday table.

The turkey will still be the centerpiece, but rather than slow-roasting it in an oven with regular basting in butter, it will be rubbed with garlic and smoked on the grill. The leftovers are especially nice, since the smoky flavor of the meat makes leftovers from soup to sandwiches taste richer and more flavorful, without the addition of any extra fat.

My husband loves mashed potatoes, but the butter, salt, and milk that make them delicious also make them dangerous, so they need a modification or two. I don’t remember where I read about substituting cauliflower for potatoes, but to ease the transition, I started using equal parts potato and cauliflower.

Now, it’s mostly cauliflower or cauliflower on its own, which I steam until it’s tender. Cauliflower has a high water content, so it eliminates the need for much milk or butter, and although the texture is slightly different, the dish seems to get a flavor boost from the cauliflower. In addition to light salt and lots of freshly ground black pepper, I add a splash of cream and a small pat of butter and mash the cauliflower just as I would a potato.

As for other sides, we’re skipping the dressing and trading out green beans (we live in the south, where most veggies tend to be doused in bacon fat) for Brussels sprouts. I am serving them roasted with turkey bacon, a mix of recipes from celebrity chefs Tom Colicchio, head judge on Bravo’s “Top Chef,” and Ann Burrell, who hosts “Secrets of a Restaurant Chef.”

Through Chef Anne I learned the secret to roasting veggies. When cooked for a short time at a high temperature, Brussels sprouts (and cauliflower florets) take on a nutty flavor that’s enhanced by crispy edges. To prepare them, clean the sprouts, cut them in half, toss them with a sprinkle of olive oil and season with salt and black pepper. Roast in a 450-degree oven until the edges are crispy.

I mix them with crispy turkey bacon, a play on an Italian recipe from chef Tom that he originally made with real bacon.
And although we’ve given most of our holiday meal a leaner look, we will have pumpkin pie. Pumpkin is rich in Vitamin A, a must for maintaining eyesight. We’ll just go for a bike ride or walk afterwards, since exercise seems to work best at keeping my husband’s blood sugar levels in check. 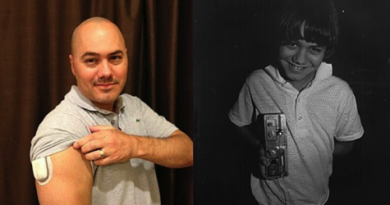 Wearing Some of the First Insulin Pumps