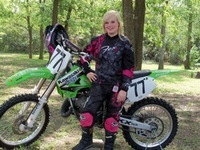 Molly Martin is a vibrant and energetic 18-year-old from Texas who’s had type 1 diabetes since the age of two. Five years ago, Molly took up motocross racing. She says, “I love riding motocross—it’s just you and the bike. I feel free when I ride, like I don’t have to think about diabetes. I do have to make sure that I test before I get on and during breaks, to make sure my sugar is doing what it’s supposed to be doing. But when I get out there, it’s just me and the bike, going.”

Molly recalls, “My first memory of diabetes was when I was starting kindergarten, and they wanted me to be able to give my shot before I could go. I guess that was kind of like the starting point of realizing that I had diabetes.”

“I gave shots until I was 12 years old, but I had rough A1Cs and a rough time with my blood sugars, so in 2005, I went to an Animas pump. They say that the pump lets you do more things, so I wanted to try it and have that carefree feeling. Once I had been on the pump for six months, my blood sugars were finally under control.”

“I have an Animas Ping now, the new one that talks to your meter. I love it because I can wear a dress and have my pump underneath it. It was a lifesaver at junior prom last year. You know big old prom dresses–you have multiple layers on, and I didn’t want to go to the bathroom and have to pull on my dress to try to find my pump. So the Animas Ping was a real blessing. I had a great time at prom.”

Molly’s father has had type 1 diabetes for the past forty years. Molly explains, “They didn’t have the technology then that they have now, so I’ve seen him go through some problems that diabetes can cause. It’s not his fault–it just happened because they didn’t have the technology back then. My dad motivates me and makes me want to take care of myself because I feel very bad for him to have to go through that.”

Molly’s hero is Ashley Fiolek, a champion motocross competitor who is deaf. Molly says, “She races her dirt bike by feeling the vibrations, and she is an amazing racer. She hasn’t let her deafness keep her down or keep her away from her dirt bike, and that’s kind of like me with my diabetes. I’ve raced with my sugar at 400 and my stomach was hurting, and I felt like I was going to throw up, but I raced and I got through it. Now, I didn’t do so well, but I wanted to do it because I wanted to show everyone that I’m not going to let diabetes get me down. If I’m not feeling good, I’m not going to just give up and say, ‘Oh, my sugar’s high, I feel bad, I’m not going to race.’ I don’t do that.”

“I think diabetes has made me more mature and stronger. I don’t think I would be as strong and as ‘going’ as I am if I didn’t have it.

On top of being homeschooled, working at a veterinary clinic, and volunteering three times a week at her local hospital, indefatigable Molly is deeply involved in 4H activities and volunteers for the JDRF. She says, “I get on the website and email kids who have diabetes. Some of those kids on JDRF, they feel down. They say things like their family just doesn’t understand how it feels to be low or to be high, or it feels like they’re the only one around who has it.”

Molly goes on, “I’ve had a few kids tell me that when their sugar is high, family members will say, ‘Your sugar shouldn’t be high. You’re in trouble.’ Sometimes family members just don’t understand. There’s a point in some kids’ lives where they just give up. They just don’t test their blood sugar and everything, and those kids are really the ones who need the encouragement.”

“I tell them that this is part of their life and that they need to control it, because otherwise it’s going to be harder for them in the long run. When their parents tell them that, they’re like, ‘oh, whatever, you’re my parents.’ But when someone else who has diabetes tells them, they’re like, ‘Oh, okay.'”

As far as her own diabetes goes, Molly says, “My last A1C was on the higher side because I had a motorcycle accident in January and fractured my knee, and it was just so hard to keep my sugars under control again. But I’m working on it. I get the cast off Friday hopefully. I’m ready to go. I keep telling my dad, ‘You’ve got to get ready because as soon as that doctor says I can ride, we’re going to the track!'” 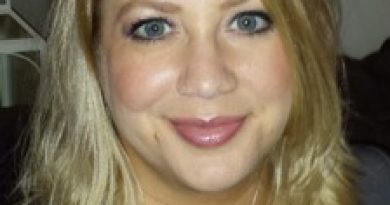 Where Do You Test Your Blood Sugar or Take Your Injections?