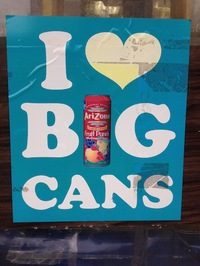 While walking through my mother’s New York City neighborhood, El Barrio, or Spanish Harlem recently, I came across an eye-catching series of Warhol-esque signs prominently displayed outside of many bodegas in the neighborhood. The signs read, “I  Big Cans” and may have been produced by beverage manufacturers in response to the recent large beverage ban passed in New York City.  Double-entendres aside on the campaign tag line, I had an issue with these signs.

In September 2012 the New York City Board of Health approved a sales ban on large sugary beverages, that had been proposed by Mayor Michael Bloomberg. The ban raised fiery debate, along the political spectrum, with concerns about obesity and health issues linked to sugary drinks versus the legality of government interference with the rights of individuals to choose what they want to eat.

Upon viewing these signs outside the bodegas, I was struck by the notion that I had not ever seen any similar signage in delis or convenience stores (which also sell these beverage brands) located in the more affluent neighborhoods in lower Manhattan. To delve a bit further, I strolled through my childhood neighborhood, a pretty impoverished section of Brooklyn, and, once again, the signage in support of “large cans” was present.

As a professional in the field of health and fitness, and a person who advocates for the improvement of quality of life for individuals from low-income communities, I was personally in support of the large beverage ban. Although the effectiveness of the ban is yet to be seen, I am aware of how empty calories from beverages can cause people, particularly young people, to gain weight because of their high sugar content, generally low nutritional value, and low levels of appetite satiety that these beverages provide. I also understand the criticism from the other side, highlighting that this ban would not stop a person from buying multiple beverages in one sitting.

However, seeing these signs displayed in, what appeared to be, low-income areas only, I had to question whether or not the campaign was a type of “neighborhood profiling” designed to appeal to those who are most vulnerable to the risk factors these drinks pose-low income areas have exponentially higher rates of obesity, diabetes, and other diet-related diseases.

Do these ads unfairly target low-income and “at risk” communities by promoting poor diet or is this normal business operating procedure? 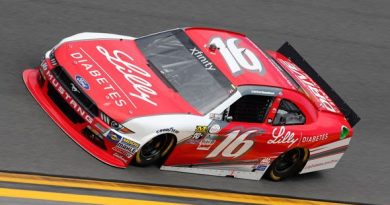 In The Trenches With Diabetes Dad: T1D Hero to Make History This Weekend in Talledega